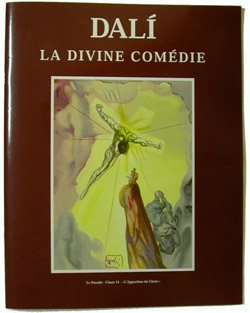 Until now, if you wanted a catalogue of all 100 woodblock prints from the Dali Divine Comedy, correctly numbered and titled, you would have had a hard time. Now, as part of event “Dali at Namur” (France), held in the fall of 2005, a new book was published describing the work that went into producing the 1960 Edition of Dali’s The Divine Comedy.

The book is 35 pages, contains text is written in French, English and Italian along with high quality color images of the 100 woodblock prints that were part of the original edition. It also contains an image of the 101st print titled “Les Servantes” or “The Maids.”

The book is SOLD OUT.  I don’t believe there is any place to purchase the book.