The Salvador Dali Visions of Chicago portfolio consists of four drypoint etchings.  The coloring is by pochoir. Each etching is signed by Dali in the lower right and numbered in the lower left. Merrill Chase Galleries, Chicago is the publisher of this suite.  We have three complete suites for sale.  One suite is on japon.  One suite is on Rives.  The third suite is on mixed papers.  Note, that one of the etchings is printed on Rives (Art Institute).  The other three are printed on Auvergene.  For the last suite there is a rich burr.   This indicates this suite was one of the early pulls of this edition.  You are viewing the actual etchings that are available on the web-site.  The etchings are available only as the complete suite. The suite overall is in good condition. However, contact us for a condition report as the condition varies.

Salvador Dali’s “Visions of Chicago”’ is a suite of 4 original etchings.  Additionally, it uses mixed-media in color which embodies the master’s remembrances and feeling about Chicago. Dali explained to the Chases that he did not see Chicago as Sandburg saw Chicago; i.e. husky, brawling city of the big shoulders.  But rather, Dali said, “Your beautiful lake shore, your riverway, and skyscrapers make me think of a tall beautiful woman.”  Thereby, this female form appears in each of the four prints and represents the spirit of Chicago. Thus. this spirit figure is imprinted in sepia color to create an ethereal effect.

The suites were executed in drypoint, a technique which permits the artist to draw almost as freely as if working with pen on a sheet of paper. A thin, pencil-like tool is held in the hand like a pencil. And through strong, controlled action of the wrist, the lines are scratched and dug into the plate. Thus, successful drypoints are difficult to execute.  Additionally,  there are fewer opportunities to correct errors than in any other processes. Subsequently skillful assured draftsmanship is imperative. Drypoint technique preserves the artist’s personal “handwriting.”

Dali was extremely excited about the circles of color which appear on each of the Chicago prints. The master explained that on a visit to Chicago’s Art Institute years ago, he was very impressed with the great pointillist painting, “Sunday on the Grande Jatte,” by Georges Seurat. It was this piece executed with dots of color that first came to Dali’s mind when Chicago was mentioned.  Dali’s unique vision was to enlarge Seurat’s dots to bright circles of color for the Chicago Suite. In addition to being major compositional elements, each circle of color represents characteristics which he sees in Chicago.  Blue is for the industry of the people and the city’s hard-working character.   Then, gold is for its artistic achievements and cultural values.  Red is for the passion, the vitality, the heart of a growing metropolis.  And purple for the pride he had discerned in its people.

It is also interesting to note how Dali worked his signature right into the drawing which appears in reverse on the prints. Also, following for you information is an explanation of how the color is applied.  The color for the Dali “Visions of Chicago” Suites was applied by the pochoir process.  It was done entirely by hand. The black and sepia areas were done by drypoint etching. Thus, the pochoir process is closely related to serigraphy.   And both processes can be referred to as stencil prints.

The stencil process was used in the Orient as far back as the Middle Ages.  Then it was used again in Europe at the beginning of the Renaissance. It was employed primarily as a device for duplicating color in order to enhance the appearance of black and white prints. But the astonishing possibilities of the method were not explored until the early twentieth century. At first used primarily to produce poster and placards.  Then the technique was soon adopted for the creation of original prints. The technique is now highly developed in America and France.

The basic method of the stencil print is the cutting of apertures of the desired shape.  The material is thin non-porous materials much as paper, metal or a silk screen. Then stencil is held firmly against a blank surface, and color is brushed or rolled across it.  Finally, the blank surface receives an image corresponding to that of the aperture.

More elaborate effects are obtained by imposing a series of stencils of the picture area. After the print is permitted to dry, it is possible to superimpose other stencils and colors. This results in building up a complex picture. One that can rival the effects produced by an artist working in oil, tempera, or watercolor. The difference between serigraphy and the pochoir process is simply the the material used for the stencil. The serigraph a silk screen is used.  Whereas in the pochoir process paper or metal are most often used to the stencil.

Tirage for the Salvador Dali Visions of Chicago

1) The complete portfolio of 4 drypoint etchings, loose as issued. Available

E-mail for Price and condition report. Call us for more information. 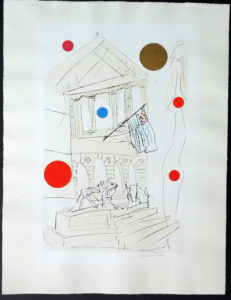 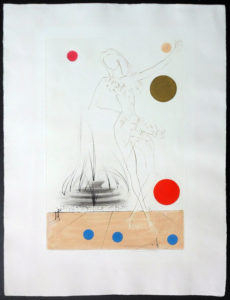 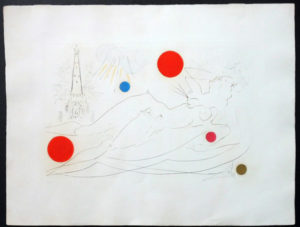 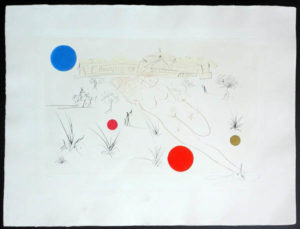